Orville and Wilbur Wright owned a bicycle shop in Dayton Ohio and used the proceeds from the business to fund their interest in flight.  They first started by building box kites and then moved up to larger scale gliders that they took to Kitty Hawk, North Carolina for flight tests on the sandy dunes.  Frustrated by the flight tests of their 1900 and 1901 gliders, which were based on aerodynamic theory of the time, they returned to Dayton Ohio and built a six-foot wind tunnel in their shop, ignored everything else, and between October and December 1901 conducted systematic tests on hundreds of miniature wings so they could study the effects of the wing shapes on both lift and drag. 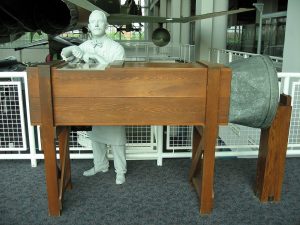 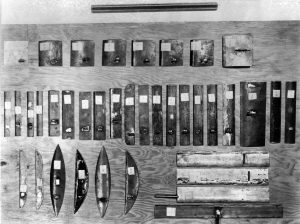 Model wing shapes created and tested by Wilbur and Orville Wright in their wind tunnel.

Based on their preliminary tests, they then thoroughly investigated the 57 most promising wing/foil configurations.

The 57 wing/foil configurations thoroughly tested by the Wright Brothers

While they ultimately chose a thin, highly cambered foil section for their famous 1903 Wright Flier, thicker air foils showed promise in their wind tunnel tests (item 20 above).  It would be another 10 years before the aviation industry would realize the advantages of thicker foil sections.

It wasn’t until the First World War when the German engineer Hugo Junkers came to the realization in around 1915 that a thick foil could produce more lift and have a higher stall angle without adding additional drag.  It also had the benefit of being better structurally as the additional internal space of thicker foils allowed all the support for the wing to be placed internal to the wing without the need for external struts and bracing.  The Junkers J1 was a decade ahead of its time and became the basis for future aircraft design.